I arrived at Interstate 80 today around 1:30pm after hiking about 17 miles. Today was the first day I have experienced humidity in the California air. Luckily, I got a very early start, as usual, to beat most of the heat. I awoke this morning atop a ski lift near the summit of some mountain overlooking Lake Tahoe and its surrounding Sierra mountains. The sunset last night, setting the snow aflame of pink and red hues and watching giant Lake Tahoe below settle down to a majestic calmness, was a perfect way to end a long 30 mile day.

As I walked those 30 miles, I didn't run into any thru hikers except for the legendary Billy Goat at mile 29. He was gingerly walking southbound from northern California after 'flippin' to avoid the snow in the high Sierra. We talked a good bit while swatting mosquitoes and filtering some water from the headwaters of Middle Fork American River. Billy Goat is always a treat to run into on the trail. He has hiked the PCT seven times and the AT three, along with several other long trails around the world. You can imagine chatting trailside with such a character. Earlier that day at mile 13, I met someone else while enjoying a roast beef, peanut butter, pepper jack burrito at Carson Pass. She was returning from a trail run with her dog along the PCT to her car at Forest Road 3, where I was enjoying that lunch and had previously spotted her Montana tag. Anywho, after a bit of small talk and speaking of our commons in Montana, we found we both had a close friend in Holly Sheppard. Holly and I both worked in the Lake area as Chefs in Yellowstone last summer, and Neddy, the trail runner with the dog, lives in Big Sky, and is friends with some of Holly's relatives there in Big Sky, Montana. Long story short: its a small world! Holly, if you're reading, hope you are well, and cooking something mean in a kitchen somewhere.

Now, relaxing, at Pooh's corner on Donner Lake, getting laundry done, taking a shower, jumping off the dock in the backyard, eating too much ice cream, and trying to repair a couple holes in my tent. Pooh's Corner is a hiker haven home of the trail angels, Bill and Molly. Bill hiked the AT in 1998 and enjoyed and appreciated the trail magic so much there, he decided to be apart of it here on the PCT since then. After calling the number posted at the highway, Bill was there, to bring down to his lake house before I could get both sandals on my feet. The first thing he instructed me to do when arriving at their place was, "Drop your pack, get a spoon outa this drawer, and eat some ice cream."
Next order of business was to put some life in the cell phone and make the call to parents. Then more ice cream, strawberries, peaches, and a jump in the lake off his back dock with 2 kayaks and dingy boat attached. Then shower, laundry, and some good grub. Dinner included catfish, bratwurst, margarita marinaded chicken, potato salad, Caesar salad, warm peanut butter green beans, vegan rice and bean pilaf, broccoli with cheese, chips and guacamole, with more ice cream and brownies for dessert. Needless to say, I was stuffed and have been wobbling around since then with a much bigger belly. Their house on Donner Lake is amazing. Was built in the early seventies with Bill and Molly as residents since 1985. Their living room has a climbing wall rising around the fire place and up to the second floor ceiling. Myself and the five other hikers staying here tonight, Happy Camper, Patch, Trash Pocket, RT and Shannon, all played a part in getting the feast on the table and cleaning up afterwards. This is the first hiker's haven house in the last 460 miles at Kennedy Meadows at mile 702, before entering into the high Sierra. Do the math, I'm at mile 1158!

I should be in Sierra City, California by Sunday evening camping behind some church. I'll get my mail early Monday morning and head back to the trail. I've got a lot of miles to catch up on in order to finish the PCT in Canada early enough to get a good start in Maine on the AT before freezing to death in the Whites of New Hampshire. Averaging about 25 miles a day, with fewer zeros, and hopefully fewer and dwindling snow fields, I'll make up for lost time on the trail and achieve my goal of a 5000 mile year. Haven't quite figured the logistics of my next certain mail drop for your letters to be sent to yet. As soon as I do, I'll pass the information along to my dad, who has been doing a great job keeping up with the blog. Glad you all can finally get a glimpse of the high Sierra traverses with the new videos he 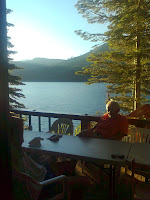 has posted. Here is a shot I took with my phone of a look out the back deck, where we all had supper and Bill digesting dinner and Donner Lake below.