It's been almost 2 full weeks since I have been on the Pacific Crest Trail, and I can feel it. I miss it. I'm craving it. The two weeks have been full for the most part though. I spent a few days in Yosemite National Park with friends. I did a lot of hiking there in the valley, mostly climbing to the tops of waterfalls(Yosemite, Vernal, and Nevada). After leaving Yosemite and getti

ng a ride to Lee Vinning, CA and another ride to Reno, Nevada with a German traveling to Yellowstone National Park, I spent two nights in Reno waiting for my early morning flight back to hot Atlanta for my sister's wedding. The first of the two nights in Reno was spent relaxing nicely in a Best Western Hotel. The second night was spent sleeping on the hard floor or massage chair in the Reno/Tahoe International Airport for my 6am flight to Atlanta. No, the massage chairs weren't working, and nor were they comfortable. 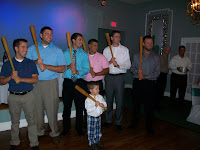 Being home was like being in smelly noisy hot sauna when i was outside, and a hetic, busy, stressful, can't-sit-down, chaos when I was inside. I wasn't prepared or excited about the heat and humidity of being back in the southeast. Spending time with the family was quick and usually consisted of getting something done in preparation for the wedding or doing something related to it. It wasn't all bad, it was just HOT HOT HOT and GO GO GO!
I did get to take in a Braves game with the my new brother-in-law and his groomsman and my dad. That was a lot of fun. Tim, my bother-in-law's brother, even got a ball during batting practice. Once the wedding finally arrived on the 2nd of July, things settled down a bit up until the ceremony. My great Uncle Dwight, who has been writing me many letters on the trail, married Stephen and Erin at the church my siter and I grew up in. It was beautiful. I have to admit I couldn't fight back a few tears when the march music played and my dad and Erin walked down the aisle. The reception was a blast down the street at Little Gardens. Lots of catching up with friends and family, answering everyones questions about the trail, drinking, dancing, and somewhat letting loose like I used to in the employee pub 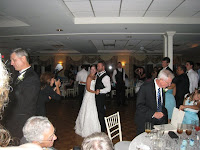 s in Yellowstone on the dance floor. My dances with my sister and Grandmother Monty were my favorites. Party continued and flowed over to the hotel where most of the Torrey and Finley families were staying. The fun didn't stop there pretty much all night. The day before my flight back to Reno, I spent mostly with my childhood friends, Andy, Justin, and Joe. Lunch at Friday's bar, putt putt golf, go-carts, batting cages, more drinks, bowling, more drinks, and another bar, which of course meant more drinks. Needless to say, the flight back to Reno was a rough one in the early morning.

Spent yesterday afternoon sleeping and last night watching the fireworks from my hotel window, sucking down as much water as I could to releive the 24hour headache. Today I walked around town exploring the biggest little city in the world. Didn't do any gambling, but did walk around a few casinos and bought a mango-tango smoothie that came with a free lei, I proudly sported around my neck.
Tomorrow I will be back on the trail by the late afternoon, due to the poor bus schedule, and hitching a ride from Lee Vinning to Tuolumne Meadows. I'll be lucky to get 5 miles in tomorrow. So, hopefully by Wednesday, I'll be off and running at 20 to 30 mile days again on the trail and getting to Sierra City, California in the next 10-13 days. That will be my next definate mail drop if any of you kind people would like to send me any letters or other goodies. Here's the address:
Zac Finley PCT hiker
General Delivery
Sierra City, CA 96125
I hope to get more videos of the Sierras, Yosemite, and even the wedding up soon. Thanks, as always for all your support and prayers. Happy trails!
Posted by Yellowstoner22 at 6:24 PM